The Best Female Racecar Drivers Of All Time 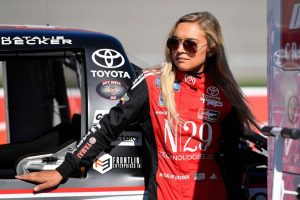 Put the pedal to the metal is a saying that most are familiar with when it comes to racing. While racing has been a male-dominated sport for numerous years, some racing car fans are waking up to the growing popularity of female racing car drivers. If you want to brush up on knowing who’s who in the female racing car circuit, here are a few of the most popular female drivers of all time.

A competent racer by anyone’s estimates, Jennifer Jo Cobb has featured in numerous races over the years, from the Daytona 500 to NASCAR. While she may not have featured heavily in racing circuits in the past few years, she has been well respected. She began racing in 2002, and only recently has decided to scale her racing efforts back. Her best score in racing was in 2010 when she rose to fame after becoming the highest female points finisher in NASCAR’s history, finishing in 17th place.

Quite possibly the most famed female race driver to date, Danica Patrick made history as the only female to have ever won the IndyCar 500 series. She has competed in numerous top class events, especially within the NASCAR circuit, where she’s participated in the Xfinity Series and Cup Series. Her first race was for the Sprint Cup series in 2012 and in it, she made 90 starts. Danica officially retired from the racing circuit in 2018 after crashing out of the Daytona 500 as well as the 2018 Indy 500.

Commonly known in racing circles as the Swiss Miss, due to her heritage, Simona de Silvestro, has been in the racing spotlight for the past two decades. She’s participated in 91 races and is currently employed by Porsche as a factory driver.  Whenever she’s behind the wheel, she’s demonstrated that she can handle the pressure, and once gave racing superstar Tony Kanaan a run for his money on the track. Her new nickname is The Iron Maiden, and her humour and warm personality have made her an industry favourite.

With over a decade of racing experience under her belt before her debut, Patty Moise officially debuted at age 26 during the Busch Series in 1986, at Road Atlanta. She has since retired, but she has done so with the statistics of having competed in 133 Busch Series’ and won four top ten positions throughout that time. This has made her the top female NASCAR driver to date and someone that young female race drivers look up to. She is married to former NASCAR racer Elton Sawyer.

A Georgian native, Tammy Jo Kirk began her racing career in 2003 in the NASCAR Xfinity series. She deserves a mention for having been the very first woman to have participated in the NASCAR Craftsman Truck Series, which is a bit like hitting jackpot playing Aussie online slots. She made a name for herself after winning 15 races in a year in the Xfinity series and won 32 races within the Camping World Truck series. She has not participated in a race since 2003.